Anybody else feel like it was Christmas morning when they woke up today?

No, the presents weren’t set out under the tree when you came downstairs. You have presents in the form of previews, predictions and highlights to get you excited for the gift you’ll receive at 9pm tonight. It’s the biggest gift you’ll receive today and the one you’ll get the most enjoyment out of over the next two weeks.

Tonight is Game 1 of the NBA Finals between the Eastern Conference champion Miami Heat and the Western Conference champion Oklahoma City Thunder. It’s the Finals the majority of us predicted at the beginning of the season, as well as the Finals we were all hoping for based on the excessive amount of talent and athleticism running through the veins of a number of key players on both sides.

END_OF_DOCUMENT_TOKEN_TO_BE_REPLACED

The Miami Heat had plenty reason to dance and celebrate after their 101-88 Game 7 victory.

It’s what they deserve for a timeless classic of a Game 7 where they ended up defeating the Boston Celtics behind a masterful fourth quarter where they held a 28-15 advantage. That effort was a necessity as the two squads went at it in a barfight for the first 36 minutes.

END_OF_DOCUMENT_TOKEN_TO_BE_REPLACED 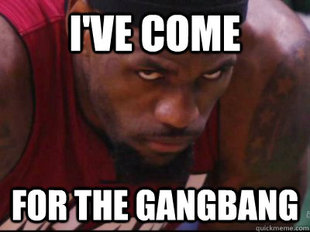 For one night, the Miami Heat became the Cleveland Cavaliers.

For one night, we could care less. In a 98-79 victory where your three-time MVP scored 45 points, grabs 15 boards and dishes out five assists, you really could care less how your team looks. The type of basketball that was played on Thursday was the exact opposite of how the Heat want to be run.

However, it was the type of basketball that needed in order for the Heat to get out of the unfriendly confines of the TD Garden and back on a jet heading to the M.I.A. for a decisive Game 7, which will ultimately decide who is making it to the NBA Finals to take on the Oklahoma City Thunder.

END_OF_DOCUMENT_TOKEN_TO_BE_REPLACED 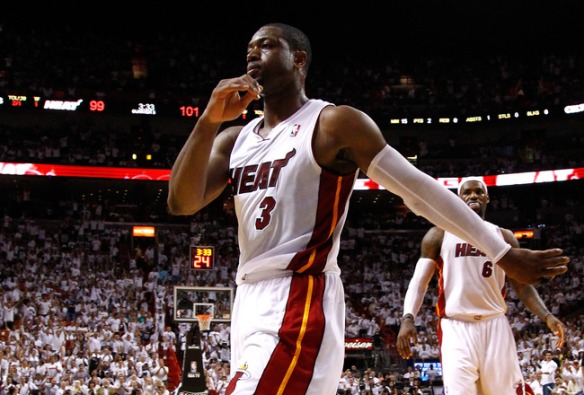 I wanted to write a recap for Game 5. Honestly, I really did.

I could have listed the infinite number of problems that led to them losing the most significant game of the year, but I just couldn’t bring myself to it. It wasn’t because I’d feel like garbage writing how my team can’t consistently execute down the stretch on either side of the ball, but because I’d be allowing my emotions to dictate how the article would flow.

END_OF_DOCUMENT_TOKEN_TO_BE_REPLACED

The South will rise again.

Well, it sort of has to or it’ll go back to Boston down 3-2 in a best-of-seven series.

LeBron James and Dwyane Wade have been having trouble scoring against the Boston Celtics defense over the past two games. Aside from not getting the calls they were previously getting, the Celtics are simply putting a lot more emphasis on stopping James and Wade at the paint.

Also, Kevin Garnett has been able to roam around freely since he’s being left to guard either Udonis Haslem, Joel Anthony or Ronny Turiaf. With that type of freedom, Garnett uses it to constantly double-team Wade and deter James from getting in the lane area. While he may be aged, Garnett still knows how to play the game right and better than anyone else on the floor in this series.

END_OF_DOCUMENT_TOKEN_TO_BE_REPLACED

The Boston Celtics scored 28 points in the second half which then led to four overtime points. 32 points in 29 minutes.

They still ended up winning. By winning 93-91 in overtime, the Celtics have come back to tie the series with a decisive game 5 set to take place in Miami on Tuesday. The series was 2-0 heading into Boston after a blowout and an overtime victory by the Heat.

The role’s have completely changed since Miami’s 14-point victory in game 1. The Heat no longer possess the firm chokehold they had on the Celtics necks. Boston has gradually worked its way back in this series thanks in part to a more efficiently run offense and playing defense right where it would hurt the Heat most–in the paint.

END_OF_DOCUMENT_TOKEN_TO_BE_REPLACED

Not since game 3 against the Indiana Pacers have we seen the Miami Heat struggle this mightily.

Outside of LeBron James 34 point, eight rebound and five assist effort in 43 minutes of action, the Heat didn’t get much from anybody. Mario Chalmers chipped in another solid 14 points and Dwyane Wade needed 20 shots to get to 18 points. Wade didn’t take a free throw in a playoff game for the first time since his first ever playoff series in 2004.

Mike Miller had 11 points on 4-of-8 shooting, but they mostly came in the fourth quarter when the game was already well out-of-reach.

Joel Anthony, James Jones, Shane Battier, Udonis Haslem and Ronny Turiaf combined for 13 points on 4-of-12 shooting. Battier led the charge with an impeccable zero points on 0-of-6 shooting from the field. We’ll give him a pass because he’s still playing excellent defense on Brandon Bass, a player who outweighs him by at least 20 pounds.

END_OF_DOCUMENT_TOKEN_TO_BE_REPLACED

We knew the Boston Celtics would punch back hard in game 2.

We didn’t expect the Miami Heat to crawl into a corner, assume the fetal position and then cry for 48 minutes.

The Heat dropped game 3 to the Boston Celtics in a most unreasonable fashion by way of a 101-91 loss. The margin of victory doesn’t do it justice as the Celtics found themselves up by 24 early in the fourth quarter. Miami then started trying and cut the Celtics lead down to nine, but couldn’t make the stops nor the shots necessary to stage a comeback of that proportion.

It would have been tough to believe the Heat would stage a 24-point comeback one game after coming back from 15 down in game 2, which was a franchise record. The loss whittles their series lead down to 2-1 with game 4 set to take place Sunday night.

END_OF_DOCUMENT_TOKEN_TO_BE_REPLACED 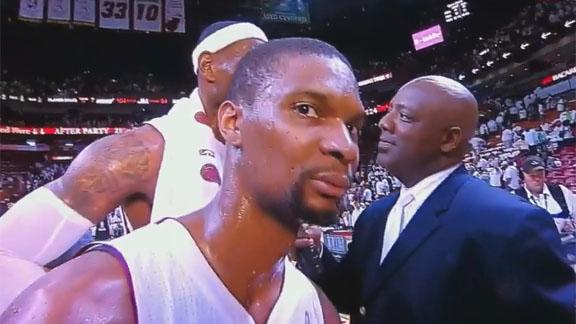 We miss you, too, buddy.

But we might not be missing him for much longer.

Chris Bosh has continued to go through light workouts and rehabilitation with the Miami Heat training staff and participated in a shootaround with the team earlier today. He is traveling with the team to Boston, but it has already been announced he will not participate in games 3 or 4.

Bosh has been sidelined since May 13th after straining an abdominal muscle following a dunk. The Heat are 5-2 without him and are currently riding a five-game winning streak into game 3. He wasn’t present with the team during the semifinals, but has since returned to the bench in a suit.

END_OF_DOCUMENT_TOKEN_TO_BE_REPLACED

The Miami Heat were begging for a loss in game 2.

Even though they managed to pull out a 115-111 victory that needed an extra five minutes, the Heat shot themselves in the foot on too many occasions. From missing 16 free throws to Dwyane Wade having an awful first half because of the Boston Celtics defensive pressure, the Heat could have easily been down by 20 points going into the half.

Usually that would be a death sentence for a team like the Heat. Without Chris Bosh on the floor, Miami needs LeBron and Dwyane to be at their absolute best at all times in order to fill the 18 point and eight rebound void left behind. If even one of them is struggling, it could end up resulting in a Heat loss since they’re already attempting to compensate for the absence of a key member.